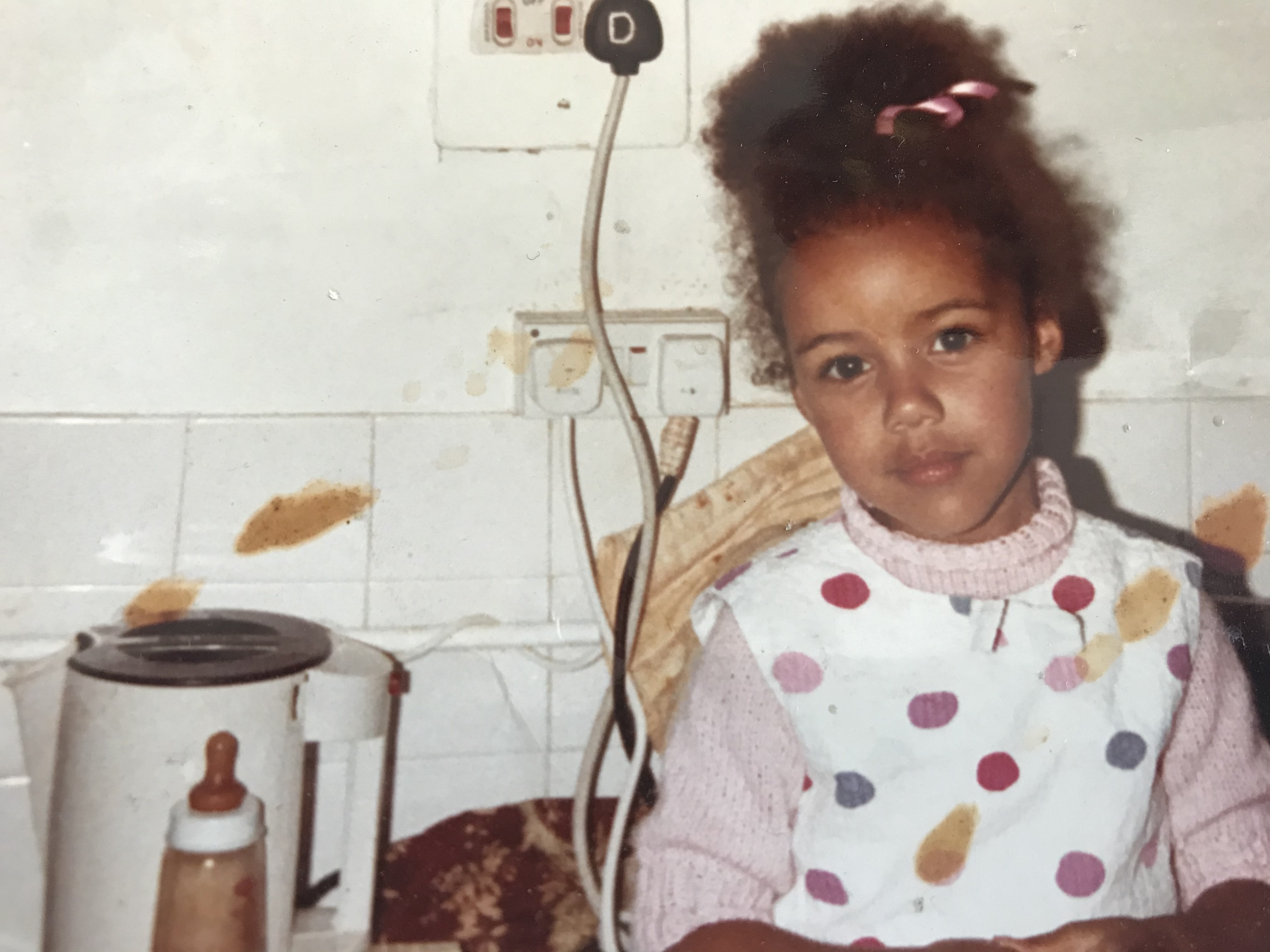 The Only Black in the Village – Part I. Becoming Black

I used to say I was born in Croydon which was actually a lie. I was born in a hospital in Kent, to a blonde-haired-blue-eyed-forty-something-year-old woman and an African American father. Fast forward a few years and my African American father had moved back to South London with a blonde-haired-blue-eyed-twenty-something-year-old woman and my mother and I remained. In the village. Alone.

My early years were filled with happiness, space, the English countryside and divorce. I didn’t know yet that I was black. Children sometimes called me ‘the colour of poo’, ‘alien’ and ‘burnt sausage’ (interesting) but I bounced these jibes back with quick fire retaliations. My mother had armed me with responses such as ‘Get over it. Half the world is brown,' and ‘Your mother spends money on sun beds to look my colour,’ – the Home Counties version of a ‘Yo’ mamma’ roast comeback.

But it wasn’t racism - the teachers said. ‘It was just silly’.

I remember watching the film Roots and my mother talking about the ‘awful way black people were treated in slavery’. Black people. I remember feeling a tight knot in my stomach as I looked into the eyes of a captured Kunte Kinte. I knew that there was a reason I was watching this film. I didn’t yet know what that reason was.

When I was eight my mother bought me a Cabbage Patch doll for my birthday. It was a doll that came with adoption papers and its own name and you had to sign the papers to say that it was officially yours. It was very exciting. I had wanted one for ages and had several friends with them already. Georgia’s was called Lulu and had yellow hair and green eyes and Helen’s had red/brown hair with brown eyes. When I unwrapped my present my delight at the familiar Cabbage Patch packaging was immediately replaced with disappointment. It wasn’t like the other Cabbage Patch dolls I had seen. It was dark brown. And I was bewildered.

I didn’t want it. I didn’t dislike the doll because it was dark brown – I disliked it because it was different to all my friends’ mini me Cabbage Patch doll daughters. And I thought it was ugly. When my mother pointed out that she had bought it because it looked like me I felt hot under my skin.

My Cabbage Patch doll came with adoption papers and a birthday and a name - Emmy. My mother said that Emmy was lovely. She handed her to me to hold and I took her as only a new mother who cannot bond with her child does – with obligation. My mother gently said that we could send Emmy back if I wanted, but perhaps she might need someone to love her. I instinctively knew I couldn’t reconcile rejecting her. Even aged eight I felt the poignancy of this moment. I decided to accept her and learn to love her. Which I did. Eventually.

Life continued, I had many friends. Even if I was jealous of their silky, straight hair that grew down instead of out, I was a happy child. My father went on to have another child with the blonde-haired-blue-eyed-twenty-something-year-old woman. It was a girl. I hoped she’d hurry up and get older so I could at least know one female that looked like me. But she came out practically white with curls that grew down instead of out, so that was that.

When I was twelve I decided I was in love with a boy called Leslie Pewby. He had NHS glasses and several brothers and sisters. He was very skinny and quite clever. We spent a summer inseparable and one night he confessed that he too ‘loved me’. I could see how nervous he was to admit this and I felt elated that he felt the same way. The hours of daydreaming, wishing and writing our names together in my school books had paid off. Leslie and I had struck the puppy love jackpot. Until he confessed another secret… that he could not ‘go out with me’ because I was black. There was that word again. I thought of Emmy and felt the same hot pickles under my skin. He didn’t say anything else. It suddenly hit me that he expected me to speak, perhaps to know what to say. I’ve always resented how white people look to you for how to react when racism occurs.

Leslie Pewby looked small and pale and I felt sick. I remember his smell and his glasses but not what happened after that.

Aged thirteen I had made a full recovery and my attention had moved on to the two coolest boys in the village, Chris Morton and James Hart. They were sixteen and seventeen and drove their own Ford Fiestas with alloys and tinted windows. They were the 90’s village equivalent to Justin Beiber. One early evening, by some divine godly intervention, they had decided to stop and chat to my best friend and I, opposite my home, in the car park. They were smoking and joking and oozing coolness. We were nervous and excited and soaking up their glory. James was playing Ready Or Not, a DJ Hype Drum and Bass remix out of his car, occasionally MC’ing (badly) along with the Jungle beat. We were having fun, with our stomachs sucked in and our lip gloss on. They were laughing, we were laughing. Chris turned and suddenly said,

“Having sex with a black girl would make me feel physically sick.”

“Can you imagine the pubes?”

Chris pushed his lips out and moved his finger over them so they flapped up and down.

“Good for a blow job though.”

to an unbearable speed. My head felt dizzy, my palms began to sweat and my heart seemed to thud in time with the Drum and Base baseline. My mouth felt dry and my throat closed up. I thought of Roots and Kunte Kinte and Emmy and Leslie Pewby and I couldn’t swallow. I just heard Lauryn Hill. And laughter. I felt like I may not survive this moment. I felt like I might just die, right there and then on the carpark tarmac.

Then I realised something - something that frightened me.

There had been a sound coming out of me. A strange, unfamiliar, disgusting sound. It didn’t sound like me, but it was.

It had been mine.

When my mother drove to London I used to push my face against the window of the passenger seat and wait for Croydon where the brown people would begin to appear. I remember on one particular journey, when I was fourteen, stopping at traffic lights and seeing a group of black girls of a similar age on the pavement. One girl in particular caught my eye. She wore a tartan short skirt and matching jacket with over the knee socks. All the girls were dressed similarly with over the knee socks and tennis skirts but the girl in tartan looked by far the best. I wanted to print their images in my mind – their outfits, hair styles, their laughter, expressions.

‘I don’t know why Black girls straighten their hair like that? Stuck out at an angle,’ my mother said, gesturing to one of the girls with half up, half down, relaxed hot combed hair.

I heard her comment somewhere in the distance. I was no longer in the car with her. I was with the group of girls. Laughing, walking, talking. We were speaking in slang and singing a 702 song and making jokes. One of us would stop to do a dance move and we would all break out laughing. We would plan who’s house we would go to and what hair styles we would do and which song we would sing. We would talk about eating certain foods and drinking certain drinks and watching certain films. We’d be loud and proud and normal.

As I stared out of the window, one of the girls turned and looked me right in the eye.

She nudged the one in the tartan skirt and pointed towards me in the passenger car seat. The group glanced over to me and the girl in the tartan outfit said something and they all started laughing. I quickly turned my head to face the front and swallowed the saliva in my mouth. It tasted of metal and tears and shame.

As the lights changed colour and my mother’s car accelerated, I turned to look back at the girls but they were crossing the road, engrossed in another conversation.

My mother spoke again. Something about ‘how run down the area was’, but I didn’t listen. Or look at her. I couldn’t. Instead I stared at the brake lights on the car in front. I stared until my eyes lost focus and the red light blurred my vision.

The Only Black in the Village