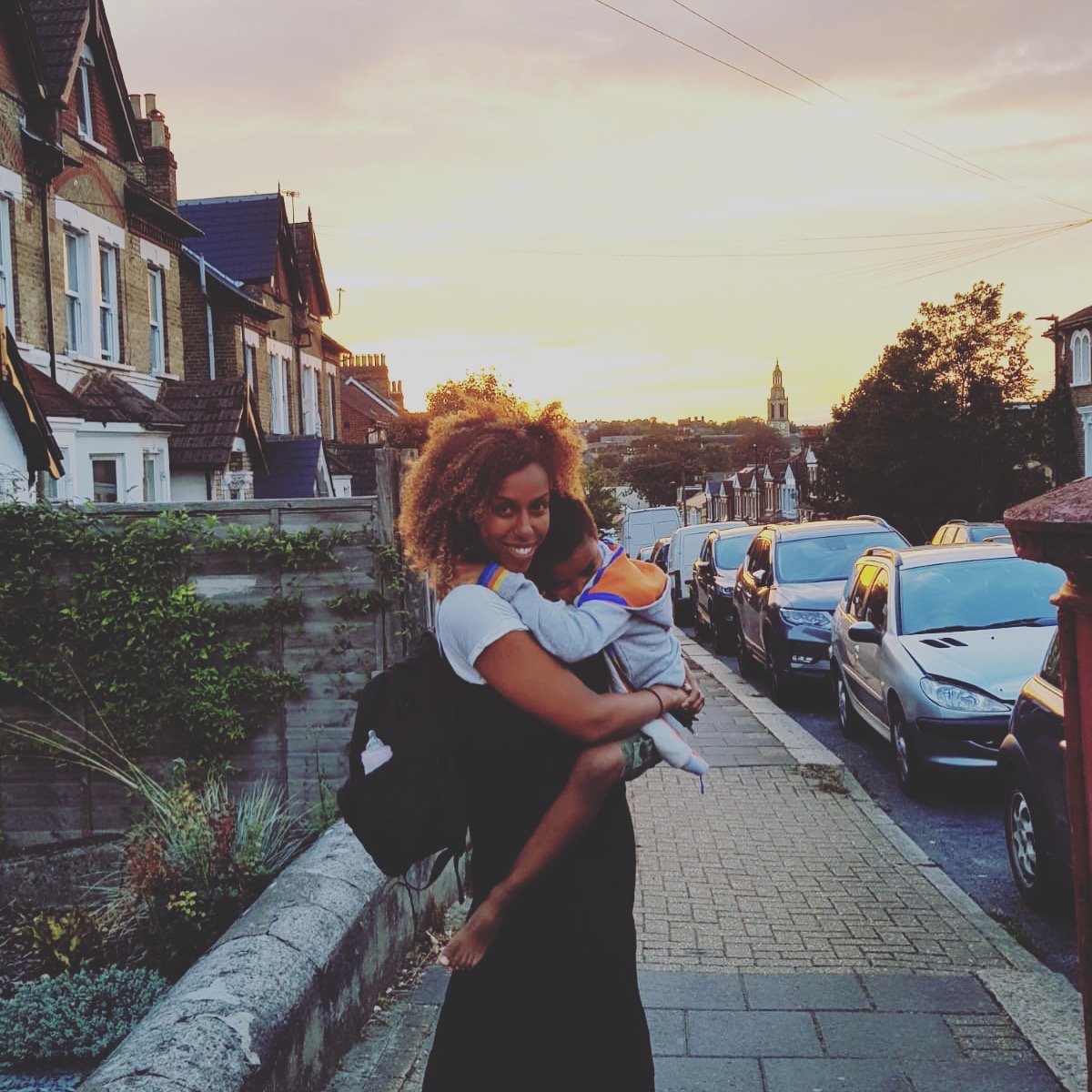 I need to be honest. I requested an additional word be inserted into the original title of this blog.

According to government census Black households are the most likely ethnic group to be headed by a single parent with dependants. So, for many of us, for many different reasons, single parenthood will be the norm. We hear often about the struggle of balancing work and motherhood from our white, middle class and married counterparts, but rarely through the lens of a non-white single mother.

Both words, to me, indicate success, choices. Together, they conjure up feelings of fullness. Of busyness, scheduling, long days and childminders. Stress, but success, none the less. An image of a (white) woman in Gail’s Bakery balancing a baby, a flat white and a MacBook Air comes to mind.

Now the image of said (white) woman in Gail’s Bakery starts to fade. Along with imagined joint bank accounts. I’m now either visualising a high-powered business woman in a suit with a live-in nanny or (and most likely), Lidl. Where a harassed woman in leggings scours for bargains with several badly-behaved kids.

At best, I conjure an image of a ‘Survivor Woman’. You know the type – the strong black woman who single-handedly raised six kids, working three jobs, attending church twice on Sundays. At worst, I get Daily Mail headlines about benefits, poverty and unruly children hurtling towards gang violence.

It’s no wonder we keep quiet about our single parent status.

We are human and we like to speak about our achievements and successes. Failed relationships/marriages don’t really fit with society’s (patriarchal) idea of ‘success’ so we tend to keep that part quiet. I suggest we don’t. Because I know many single mothers who are creating inspired, empowered and wonderful lives for themselves and their children and we need to hear about it. And also because, as it turns out, my name was on the guest-list after all.

I am an actor, writer and theatre practitioner and a black dual heritage single mother. I have a career I love – a vocation. I also have a child to support and no financial help from his father. Sometimes I feel like I’m bossin’ life and other times I consider how long it would take me to retrain as an accountant. There is no ‘one size fits all’ example of single parenting. There are the exes that co parent – like Erykah and Andre – as well as there being the lone parents who are, well, completely alone. And everything in between. I can’t speak to all of these experiences but I can speak authentically about mine.

I remember my first job fresh out of drama school – a year touring with the RSC. We were a cast of twenty – fifteen men and five women. I was the youngest female, being only twenty-one. But even at that young, tender age I was perplexed that none of the female actors had children. I concluded that it would be unrealistic for a mother to leave the home and be on the road for a year. Yet many of the male cast members had children. In fact, several of them had very young children and nobody seemed to think that strange. Partly, I feel that’s because they are men and the 1950s aren’t that long ago but also because realistically a year’s consistent work as an actor is particularly hard to turn down – especially if you do have a young family to support. Taking the work is the noble thing to do – for a father. So what happens if you are the mother and the breadwinner?

For many of us we are not just balancing children, ex-partners and 9-5’s – we are balancing unpredictable, financially unstable freelance careers in the arts industry. A competitive, over saturated industry where all the child-free are happy (unhappy but willing) to work ridiculously long hours for little pay – or sometimes no pay at all.  This is true for many of us – writers, producers, directors – and certainly so for those of us known as actors. Before I had a child or even a long-term relationship the reality of life as an actor used to sometimes send me into cold sweats. Having to sustain yourself between acting jobs only to then leave everything and disappear on tour for six months is enough to make even the most spontaneous soul freak out. Add a child in the mix and I can’t lie the heart palpitations are real. The quick dose of endorphins I receive when my agent calls with an offer is almost instantly replaced with cortisol – the stress hormone – as my mind races through dates, childcare options, school runs and, of course, guilt. This is true for any mother but when you are a single mother the responsibility is greater and the feelings are amplified. If I am not in the house, no one is in the house – unless I pay them to be. That is a fuckery. Then there is the financial side. I have a mortgage to pay. Alone. Another (very fortunate) fuckery. So I have to work, and I want to work so how do I do it? Here are some of my work-in-progress top tips for single mamas and the industries that we occupy:

Someone once said a job will often give you three things – cash, creativity or credits. Most jobs will give you one or two of those, sometimes when we are lucky, along comes a job that gives you all three. As a single mother one has to be extra strategic. No, I’m not around for endless low paid fringe jobs but if I take that TV job with less creative reward I can afford to write my own play or act in yours. Equally if a job isn’t paid well or creatively fulfilling then it is not worth me taking time away from my other full-time (favourite) job of raising a human. Until my child was school age I used to take him away with me – on tour and to jobs abroad. It was very very hard but seemed better than being apart from him. But I also know other single mothers who decide to call upon the other parent (yes they exist) or a relative/childminder and venture off solo. Think of your year ahead. If you need money can you teach or coach during school hours? Can you take on less or more work during holidays? Inform your agent, employer, manager of this. And if no work comes in and you’re lucky enough to have enough money – enjoy the parenting during the quiet lull.

I remember going to a packed recall audition in a West London casting studio on a Tuesday evening. I had my son with me (obvs) still in school uniform and they were running two hours behind. I nearly leave but get called in just before. We traipse home to South London with me muttering under my breath about not doing commercial castings anymore. The next day my agent rang and I got the job. Great. She also said to pack my bags as I would be going to Vancouver in 24 hours. For 8 days. So the most stressful 24 hours ensued where I had to see if I could even make it possible. This is hard for anyone but for a single parent it can feel overwhelming. So please, if you work in casting or production – give us notice. Most times I have found things can work out but we need time to arrange and organise our offspring.

Industry gods, please consider the cost of childcare when paying freelancers. Yes, there are people who will always work for less but if you want me and my fifteen plus years experience then I shouldn’t have to ask myself ‘Can I afford to take this job?’ By nature there is less childcare provision for freelancers – no childcare vouchers or onsite nurseries so let’s at least consider this when contracting artists and pay accordingly.

Ask men about their kids.

They are parents too – some are single fathers – and they might even appreciate the sentiment. And if they don’t appreciate it then they are probably the ones who need to hear it most. The other day I was with a fierce and fabulous friend of mine and we bumped into a guy we both knew. He had recently had a baby and so my friend asked loudly with concern “Where’s the baby?” to which he looked confused and answered “At home with his mum, obviously. Why?” My friend said casually “Oh, it’s  just what everyone asked me when I was out and about without my newborn.” Silence prevailed.

There is something we single mothers who are balancing careers can do for ourselves – start speaking out about our experiences and not keeping our family dynamic a dirty secret. Because one thing is for sure, with the rise of separation, divorce and female financial freedom, we are a demographic on the rise. And like my good (also black single mother) friend says, ‘Build your village.’ Find the friends, neighbours and community that will help us raise our children. I’m not a big fan of the obsession with ‘nuclear family’ but when you are a single parent that set up alone doesn’t cut it. Ask friends to help you – and in return be there for them and their kids/dogs/cat. Look out for other single parents at your school, work, gym – help each other. And as with all things in life when things seem overwhelming take some deep breaths and break the challenge down into small manageable actions. It might not be clear how you will manage filming in Cardiff plus a teaching position at a drama school and the school run. But you can start by asking the mum at school if she can do pickup on Monday.

Don’t let it break you down. It is possible. I wish someone had told me that. It is.

However, sometimes, it will feel impossible. And that’s ok. But it isn’t.

And remember that as hard as it may get, it is nothing compared to being in an unhappy/lonely/abusive relationship. Raising a child is a privilege. And being able to do that as an independent woman is something many women are still denied. Don’t get me wrong, I love relationships and have recently met a wonderful man but we need to be open about the fact that family units come in many shapes and sizes. So let’s fart in the face of stereotypes and redefine single motherhood as the positive, powerful, peaceful adventure it can be. Leaving my past relationship was one of the hardest things I have done and it is something that I am now incredibly proud of. I faced my fear and rebuilt a healthier life for myself and my son. And if I can do that then I can get to an audition in West London.

This blog post was commisioned and published on 15/11/2019 for Tiata Fahodzi.